This page was created programmatically, to read the article in its original location you can go to the link bellow:
https://wranglernetwork.com/news/having-fun-and-winning-first/
and if you want to remove this article from our site please contact us

Helena, Mont. – A Montana transplant is claiming the Big Sky Country as his home, and the Last Chance Stampede his favorite rodeo stomping grounds.

He was aboard the C5 Rodeo horse Sunday Sinner, the same horse he rode at last year’s Stampede, where he tied for third place.

“When I saw I’d drawn him this year, a big smile lit up across my face,” he said. “I knew I was definitely going to Helena to have some fun and win first.”

Ranked eighth in the PRCA world standings, he sat out for two months, recovering from elbow surgery, where the doctor removed seventeen bone chips in his riding arm. “They were causing a bunch of pain and inflammation, and it’s awesome now. It’s never felt better.”

It’s not the first time the Utah-turned-Montanan has dominated at the Stampede.

He estimates he’s competed at the rodeo since 2013, winning it twice (2013-2014) and placing nearly every other year. Bennett has qualified for the Wrangler National Finals Rodeo nine times.

Raised in Utah, he moved to the Hamilton, Mont. area four years ago, to date his now-wife Savannah. “She was working in Hamilton, and I said, well, I can rodeo from anywhere, so if we’re going to get serious, I guess I’ll be moving to Montana.”

He loves it. “Utah will always be home, but when you drive into this state, it’s the calm and the space, and the people are so genuine. I love Montana and I love to call it home.”

The team roping lead changed hands during the second performance of the rodeo. 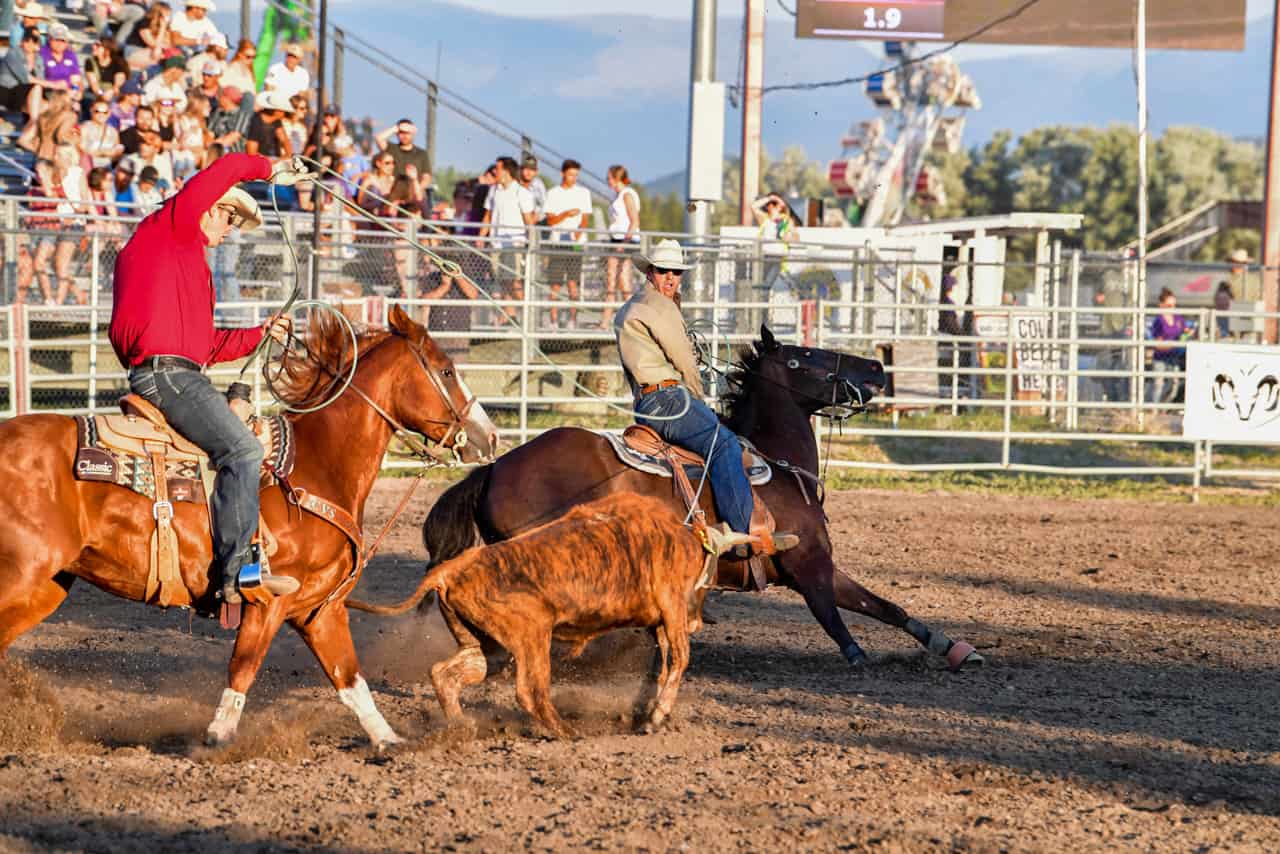 Rhen Richard heads the steer that he and heeler Jeremy Buhler took the lead with after the second night of the Last Chance Stampede. The duo had a time of 4.5 seconds. Photo by Burning Ember Photography/Josh Homer.

Rhen Richard and Jeremy Buhler turned in a time of 4.5 seconds to be on the top of the leaderboard.

The two knew the steer they had drawn, and strategized for their run.

“The steer was supposed to be stronger,” Richard said, “so we had a game plan. Jeremy was going to get up there, to let the steer see him, and try to get him to where he was stepping towards me. I felt like he did that perfect and I got a really good start. It was one of those runs that everything played into our hands. That’s the kind of runs we’re after.”

The duo has had several runs lately that have been ideal. They’re coming off a big win at the Salinas, Calif. rodeo, pocketing more than $10,000 each and giving them a chance to take a breather from the rodeo road.

After rodeos this weekend, they’ll each go home for a few days; Buhler to ride horses around the ranch and Richard to ride futurity horses.

Richard is preparing seven roping futurity horses for a futurity in Rock Springs, Wyo. in two weeks. Being on horseback, even on his rodeo days off, is good. “It’s a job, but we enjoy it. It gets your mind fresh again.”

The final night of the 61st Last Chance Stampede takes place on Sat., July 30, beginning at 7:30 pm. The night will honor 4-H youth. A concert by the 80s tribute band Hairball will be held following the rodeo. For more information, visit www.LCCFairgrounds.com.

Fast times/high scores from the 2nd performance (and slack from July 28) of the Last Chance Stampede, Helena, MT July 29, 2022

** All results are unofficial. Visit Prorodeo.com for results and www.LastChanceStampede.com for fair and rodeo information.


This page was created programmatically, to read the article in its original location you can go to the link bellow:
https://wranglernetwork.com/news/having-fun-and-winning-first/
and if you want to remove this article from our site please contact us

This Ridiculous Gadget Is My New Snack-Time BFF – The Kitchn