This page was created programmatically, to read the article in its original location you can go to the link bellow:
https://www.archdaily.com/988966/ferdows-house-naghshekhak-architectural-group
and if you want to remove this article from our site please contact us 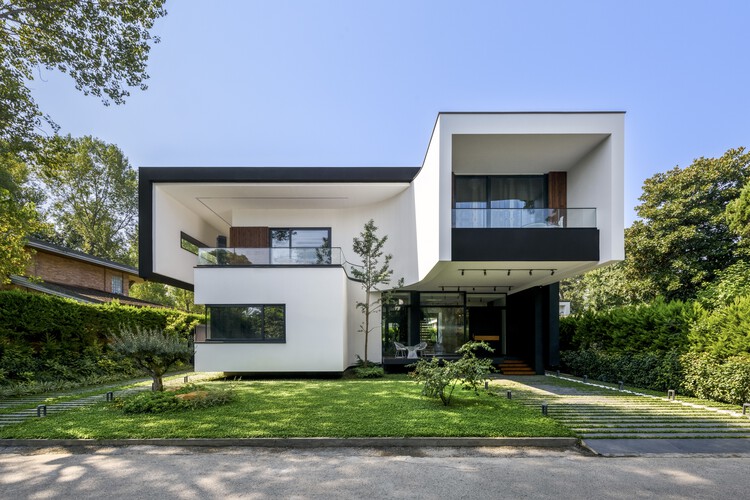 Text description provided by the architects. Ferdows House is designed for a young couple and their child. The project is located in a villa complex with seasonal residents, but the client intended to live permanently in a house with his cultural background. Nowadays, the architecture of Mazandaran has taken a new form, which is influenced by incorrect social, cultural, and environmental policies. The arrival of new ideas and technology has caused new challenges for Mazandaran (function, behavior, form) in terms of social, cultural, and architectural types, which requires a review of this situation, especially its impact on architectural objects.

Ferdows house as a transformed local object in response to existing challenges by using the alphabet of northern architecture and the available technological power is looking for spatial and formal diagrams (using the redefinition of northern architectural elements). After the preliminary reviews of the project, the ideogram was planned with a modular structure, which was developed in its initial form according to the physical plan and orientation. The final form has positive and negative masses (taken from the diagrammatic structure of native Mazandaran architecture: open, semi-open, and closed) in physical and perceptual dimensions, which creates a variety of spatial and visual communication for the user. It is also possible to make maximum use of sunlight, and favorable winds and create privacy in it.

The roof as a semantic and functional element in the architecture of Mazandaran has taken a new meaning according to the project limitation (height), the function of it is not limited to the roof and plays a climatic and visual role in the side walls. On the west side, as a second shell, in addition to the function of insulation, as a vertical corridor of the facilities, and on the east side, as a hanging curtain, in addition to maintaining the opening, it has ensured the privacy of the terrace. Ferdows House, emphasizing the new expression of northern architectural elements, imagery from the past, local materials, and knowledge, is looking for a new type of symbiosis with this climate that has a suitable solution in response to this challenge.

This page was created programmatically, to read the article in its original location you can go to the link bellow:
https://www.archdaily.com/988966/ferdows-house-naghshekhak-architectural-group
and if you want to remove this article from our site please contact us

Photography + Review: Meet Me @ The Altar – The Alternative

Food insecurity and food deserts in the US: A research roundup and explainer