This page was created programmatically, to read the article in its original location you can go to the link bellow:
https://jewishstandard.timesofisrael.com/swimming-with-the-sharks/
and if you want to remove this article from our site please contact us


When the movie “Jaws” came out in 1975, people developed a whole new fear of sharks. We learned that they’re deadly creatures who live in the ocean and feast on unsuspecting swimmers. Even the music from that film elicited goosebumps.

If you have been watching or listening to the news, you will know that there have been several shark-related incidents in our very own neck of the Atlantic Ocean this summer. A surfer, a lifeguard, and 10-year-old boy all have been victims of shark bites. The news makes it seem that sharks are more a danger than ever.

But this is not the case, according to the experts; indeed, it is “fake news.”

Within our Bergen County community, we have a shark expert. A talented, smart, young Orthodox Jewish woman who has decided to go against the grain. Instead of becoming a doctor, a lawyer, or an accountant, she decided to pursue her love of sharks. Yes, you read correctly. Sharks.

Yakira Gerszberg Herskowitz, who grew up in Highland Park and now lives in Englewood, graduated from the Frisch School in Paramus and then from the University of Maryland. In college, she majored in environmental science and policy, with concentrations in wildlife ecology and management. She now is a candidate for a master’s degree in marine ecology at the University of Miami, working with the Shark Research and Conservation program.

The question remains. How does a nice Jewish girl decide to become a shark researcher?

As a 12-year-old at Camp Stone, a Jewish camp in Sugar Grove, Pennsylvania, Ms. Gerszberg had a counselor who talked about her love of sharks. “I immediately thought she was crazy, but then realized I valued everything else she had taught me, so maybe there was some validity to liking sharks,” she said. “I went home after camp that summer and dove into learning all I could on the subject.” And then took that passion and decided to make it her life’s work.

Through her research, Ms. Gerszberg discovered that although sharks are seen as man-eating predators, they’re really the underdogs of the sea, and they are quite vulnerable. Studies show than an estimated 70 to 100 million sharks are killed every year because of shark finning, overfishing, and hunting, so it would seem that people are far more dangerous to sharks than sharks are to people. (Shark finning is catching a shark, removing a fin, generally from a living shark, and then throwing the rest of it back into the water, where it will die quickly and brutally. Fins are the most valuable part of the shark, and it takes less room to store just a fin than a whole shark. Finning has become a lucrative business; it is illegal in the United States and booming in Asia.) 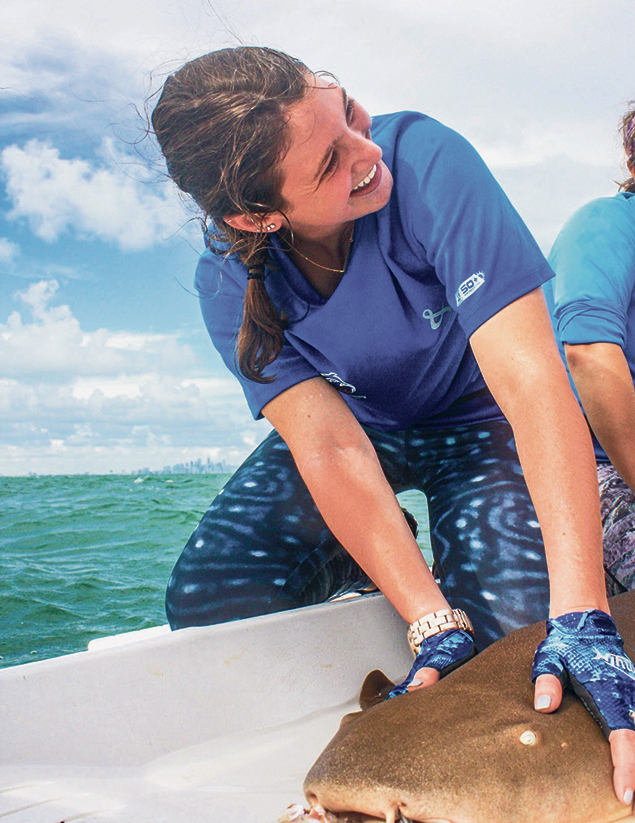 Ms. Gerszberg smiles as she tags a shark, which, despite appearances, is not dead.

“This fact is hard to believe, since the few human-shark encounters that occur annually are all over media outlets, whereas the rapid decline of sharks is rarely noted,” Ms. Gerszberg said. “It is important to note that the ocean is the sharks’ territory; when humans enter the sea, we are entering their space. The number of times people have been in the ocean near a shark without even being aware of it far outweighs the number of times that humans are made aware of the close encounter they may have had with a shark. This is often because sharks are more scared of us than we are of them, although I know it’s hard to believe based on the way media over-represents these negative shark encounters.”

According to Ms. Gerszberg, there often is a spike in shark sightings and encounters close to shore during the summer months. This is not a new phenomenon; it has always been this way. Since there are more people in the water during the warmer months, there is a higher chance of a human-shark encounter. Additionally, bait fish often are abundant in the warmer, shallower areas of the sea, luring sharks to these areas to prey on them. The primary motivation for shark attacks often is argued to be “mistaken identity.” That means that humans are mistaken as prey, often because they are close to where the sharks are feeding on actual prey species, like bait fish.

“Furthermore,” Ms. Gerszberg said, “this is my personal hypothesis, but I think that shark encounters this summer seem especially high because there are more people gathering at beaches and in the ocean this year than the previous few years,” because covid restrictions have been lifted.

Sharks have been around for more than 400 million years and they play a critical role in the environment. Ms. Gerszberg knows that though swimmers might be happy about the decline in the shark population, it could be disastrous to the fragile ocean ecosystem in which they live.

She’s always enjoyed the idea of a shark as the underdog, Ms. Gerszberg said. “I have always rooted for the underdog. Protecting the vulnerable is a Jewish value that was ingrained in me since I was young. Once I learned how vulnerable the shark population was, supporting them just made sense to me. Additionally, sharks are severely misunderstood, something that resonates with me on a personal level. I often find that people misunderstand me.

“I have found so much of myself in the sharks I study.”

Growing up, Ms. Gerszberg was warned that she couldn’t be a practicing religious Jew and work with sharks. “While hearing that initially upset me, it ultimately fueled my fire to achieve my goals and prove all the people that doubted me wrong,” she said. “I am now in the field of my dreams and remain an observant modern Orthodox Jew. When school was extra challenging, and I started having doubts, I always reminded myself that I’m not doing this only for myself, but also for any young Orthodox Jewish girl or boy who wants to follow a dream that they’re told they should quit while they’re ahead.

“The doubt I received drove me to persevere and make it in the field of marine science.”

Ms. Gerszberg also talked about being extremely grateful to have mentors and colleagues who respect and understand her religious observance. “I have luckily never been met with negativity about being an Orthodox Jew,” she said. “Although keeping Shabbat and observing the Jewish holidays means I miss a lot of shark-tagging opportunities, which is part of my research, I have no regrets about keeping to my beliefs and maintaining my observance.”

Ms. Gerszberg, who recently got married — her husband, David Herskowitz, is the founder of Splash Creative, a digital marketing agency —moved from Miami to Englewood and is working on finishing her degree. “Additionally, I travel back to Miami once in a while to assist with field work,” she said.

“After I graduate in December, I plan on working toward my goal of developing a nonprofit that focuses on shark education and public outreach, in order to better protect these critical species.”


This page was created programmatically, to read the article in its original location you can go to the link bellow:
https://jewishstandard.timesofisrael.com/swimming-with-the-sharks/
and if you want to remove this article from our site please contact us