This page was created programmatically, to read the article in its original location you can go to the link bellow:
https://www.rit.edu/news/rit-astrophysicists-collaborate-jwst-survey-yielding-wide-view-early-universe
and if you want to remove this article from our site please contact us


New images from NASA’s James Webb Space Telescope show what may be among the earliest galaxies ever observed. The images include objects from more than 13 billion years ago, and one offers a much wider field of view than Webb’s First Deep Field image, which was released July 12. The images represent some of the first out of a major collaboration of astronomers and other academic researchers teaming with NASA and global partners to uncover new insights about the universe.

The images were taken from the Cosmic Evolution Early Release Science Survey (CEERS), led by a scientist at The University of Texas at Austin. Jeyhan Kartaltepe, an associate professor from Rochester Institute of Technology’s School of Physics and Astronomy, is one of 18 co-investigators from 12 institutions along with more than 100 collaborators from the U.S. and nine other countries. CEERS researchers are studying how some of the earliest galaxies formed when the universe was less than 5 percent of its current age, during a period known as reionization, and how galaxies evolved between then and today. 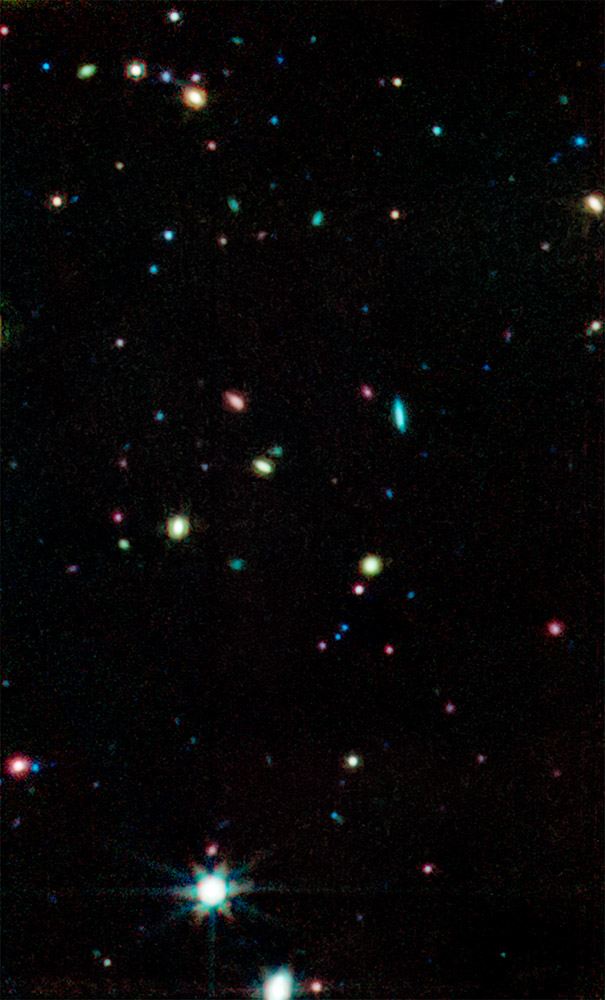 An image taken with the Mid-Infrared Instrument (MIRI) on the James Webb Space Telescope from a patch of sky near the handle of the Big Dipper. This is one of the first images obtained by the Cosmic Evolution Early Release Science Survey (CEERS) collaboration.

The team has identified one particularly exciting object that they estimate is being observed as it was just 290 million years after the Big Bang. Astronomers refer to this as a redshift of z~14.

The finding has been published on the preprint server arXiv and is awaiting publication in a peer-reviewed journal. If the finding is confirmed, it would be one of the earliest galaxies ever observed, and its presence would indicate that galaxies started forming much earlier than many astronomers previously thought.

The unprecedentedly sharp images reveal a flurry of complex galaxies evolving over time—some elegantly mature pinwheels, others blobby toddlers, still others gauzy swirls of do-si-doing neighbors. The images, which took about 24 hours to collect, are from a patch of sky near the handle of the Big Dipper, a constellation formally named Ursa Major. This same area of sky was observed previously by the Hubble Space Telescope, as seen in the Extended Groth Strip.

“These images are exciting because the sheer number of these really high redshift galaxy candidates is larger than we expected,” said Kartaltepe. “We knew we’d find some, but I don’t think anybody thought we’d find as many as we have. It either means the universe works a little bit differently than we thought or there’s a lot of other contaminating sources and these candidates will turn out to be something else. The reality is probably a mix of both.”

Kartaltepe has multiple leading roles in the survey, focusing on morphology—measuring the shapes and sizes of galaxies and studying how their structures evolved—and setting up and analyzing spectroscopic observations of distant galaxies using the NIRSpec instrument. Three of her astrophysical sciences and technology Ph.D. students—Isabella Cox, Caitlin Rose, and Brittany Vanderhoof—have been involved in the survey and working with the data.

The entire CEERS program will involve more than 60 hours of telescope time. Much more imaging data will be collected in December, along with spectroscopic measurements of hundreds of distant galaxies.

Kartaltepe is also principal investigator of COSMOS-Web, the largest General Observer program selected for JWST’s first year. Over the course of 218 observing hours, COSMOS-Web will conduct an ambitious survey of half a million galaxies with multi-band, high-resolution near infrared imaging and an unprecedented 32,000 galaxies in mid infrared. JWST is expected to begin collecting the first data for COSMOS-Web in December.

This image—a mosaic of 690 individual frames taken with the Near Infrared Camera (NIRCam) on the James Webb Space Telescope—covers an area of sky about eight times as large as Webb’s First Deep Field Image released on July 12. It’s from a patch of sky near the handle of the Big Dipper. This is one of the first images obtained by the Cosmic Evolution Early Release Science Survey (CEERS) collaboration.


This page was created programmatically, to read the article in its original location you can go to the link bellow:
https://www.rit.edu/news/rit-astrophysicists-collaborate-jwst-survey-yielding-wide-view-early-universe
and if you want to remove this article from our site please contact us

Ask Ethan: Why can’t dark matter be made of light?

The 2022 Motorola Razr is only launching in China, but we want it, too

If You're Short on Storage Space, You Need This Innovative 5-in-1 Kitchen Tool Set