This page was created programmatically, to read the article in its original location you can go to the link bellow:
https://www.archdaily.com/986717/antwerp-city-hall-hub
and if you want to remove this article from our site please contact us 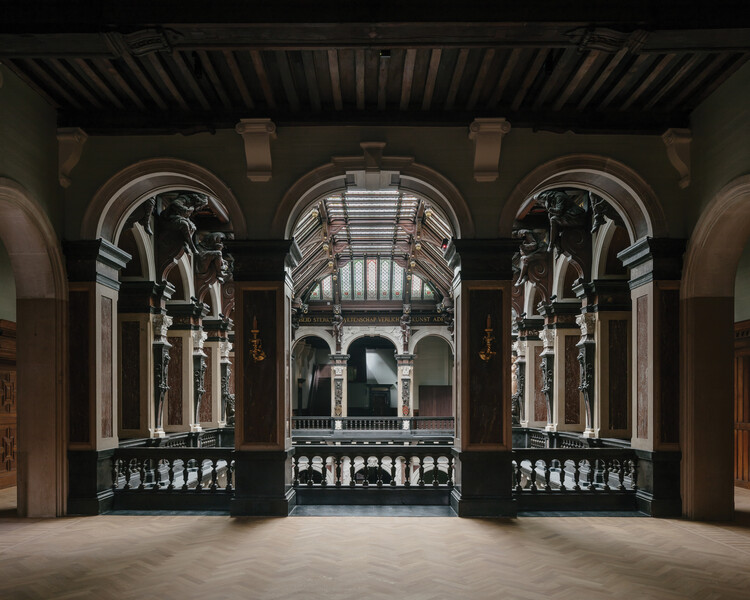 Text description provided by the architects. The City Hall becomes a true ‘house of the city’. The ground floor and Noble floor will be (partially) opened up to the public while all councilors and their staff will be brought back under one roof. In addition, the façades and interiors needed to be completely restored, while the building also had to be readied for the future in terms of comfort and energy performance (BREEAM standard: ‘excellent’).

Despite the extent of the transition realized in the 19th century, it nevertheless succeeded in retaining the City Hall’s historic “layered coherence”. There were certain revisions, newly made connections, and shifts in emphasis. And, building on the articulation and dimensions typical of the Floris style that defined the original City Hall, a more contemporary atmosphere was created that was evocative of the neo-Flemish renaissance. Nevertheless, the original structure remained legible – it was literally “set forth” – and to the present day remains the canon of the building.

Preserving and reinforcing this layered coherence throughout the City Hall’s second historic transition calls for an approach that has respect for the essence of the existing structure. An architecture founded on the conviction that the existing building must define what it needs itself and that answers to new questions are in fact already contained within the building’s historic structure or “code”.

The façades and interiors were restored with great attention and respect for the traces of time. The building did not undergo a ‘rejuvenation cure’ but a dignified restoration. We restored the spatial structure of the ground floor so that the space regains its brightness. All the gates can be opened again and the main entrance is located on the Grote Markt.

The second or ‘Illuminated Floor’, currently unknown to many people, will be made equally important as the ‘Noble Floor’ because it is here that the majority of councilors and their staff will be housed. We designed two centrally located, double-height spaces – the vestibules – which will let in more daylight and open up the view toward the skies and the historic bell tower. The vestibules extend the spatial articulation of the underlying floors to the level of the new ‘Illuminated Floor’.

This page was created programmatically, to read the article in its original location you can go to the link bellow:
https://www.archdaily.com/986717/antwerp-city-hall-hub
and if you want to remove this article from our site please contact us

Photography + Review: Death Cab for Cutie and Thao – The Alternative

New food labels could help you make smarter choices. Or not. – The Washington Post