This page was created programmatically, to read the article in its original location you can go to the link bellow:
https://www.archdaily.com/988432/meganisi-house-hiboux-architecture
and if you want to remove this article from our site please contact us 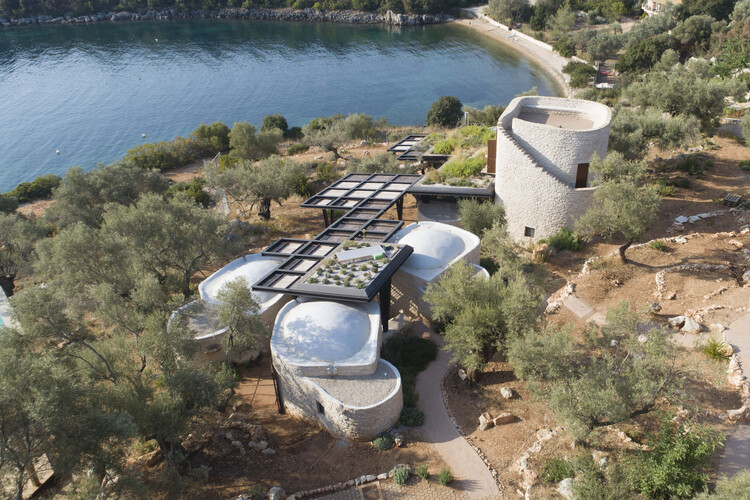 Text description provided by the architects. The house is formed as a complex of scattered domed round volumes, and a square grid canopy connecting them, amongst 42 existing olive trees on terraces retained by dry-stack walls (xerolithies). Inspired by the pastoral round stone dwellings found in several places, among them in nearby Eglouvi, Lefkada, the stone volumes aim at conserving the terraced configuration of the ground, following the curved patterns, thus paying respect to the pre-existing habitat of the place and serving the idea of a new human dwelling among the existing non-human living (trees) or non-living (rocks) entities, with the least possible disturbance. None of the trees was cut or moved.

The steel canopy contrasts the almost archaeological existing surface of the land and its habitation as a protecting layer over it, acquiring a form so often found in the shepherds’ sheds of the Mediterranean landscape, a thin cover parallel to the inclination of the ground. The steel canopy thin layer is new ground, offset, and planted. Thus the new is immersed in the preexisting.

The complex consists of the main residence and 5 domed guest houses. The domed volume of the master bedroom and a two-story “watchtower” with an accessible roof, form the main residence by means of glass curtain walls that ensure an inner heated space (for living/dining and kitchen) while allowing the flow of the terraced land to traverse the entirety of the house. The indoors-outdoors continuity creates spaces valuing living in the countryside.

The complex serves as a landscape-immersive joint retreat for groups who can rehearse together on the hexagonal stage (shala), train, and gather around a common outside table, called the piazza.

This page was created programmatically, to read the article in its original location you can go to the link bellow:
https://www.archdaily.com/988432/meganisi-house-hiboux-architecture
and if you want to remove this article from our site please contact us