This page was created programmatically, to read the article in its original location you can go to the link bellow:
https://www.row2k.com/worlds/features/2022/9273/lobnig-sisters-in-w2x—girls-just-wanna-have-fun-/
and if you want to remove this article from our site please contact us


The Lobnig sisters, Tokyo Bronze Medalist Magdalena and her older sibling Katharina, first raced together internationally as juniors, until Katharina aged out. That, of course, sent Magdalena off on her now decade-long career in the single.


Here in Racice, they are back together in the double. It is a boat they have rowed over the years while they trained together, both in singles and the occasional bigger boat, as Katharina’s work schedule as a police officer allowed.


The double came together this year because, just as Magdalena was looking to take a break from the single and try something different, Katharina was performing at a level that gave her the opportunity to race the double, with another partner, at Europeans.


Magdalena took 4th in the single at that same regatta, in what was her first race of the season after having to skip the World Cups and withdraw from Henley due to illness. Being out of the medals at Europeans created an opening to get back in the double with Katharina–something Magdalena mentioned hoping to do again one day on a recent episode of the “Row Show” podcast.


Coincidentally, 2022 marks the 10-year anniversary of their last official race together, according to the sisters. 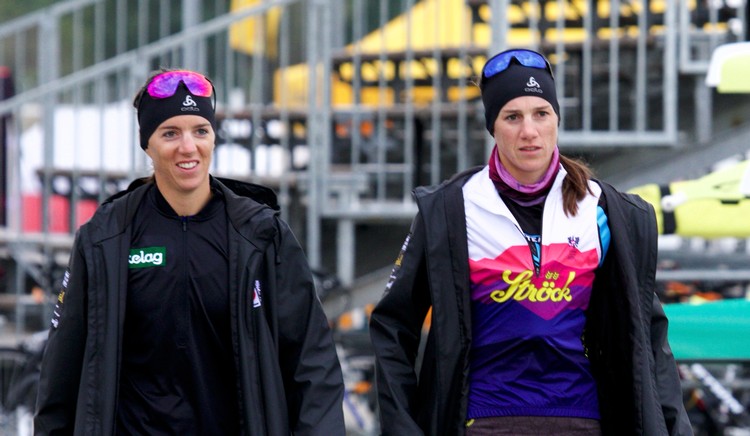 Magdalena, left, and Katharina in the boatyard


row2k caught up with the sisters Lobnig in the boat yard this morning to get the story of this sister act:


Magdelena Lobnig: It was quite a surprise that we are in the double, but as I’ve said: it was always my dream to do that.


We started off together in a boat when we raced as juniors. So in our first World Junior Championships, we got third, surprisingly. That was quite a good start. And then we got split up, because Katharina proceeded to the U23s and I was still a junior. Then she stopped and continued and stopped and continued rowing, for the past 10 years or more, but she was always my training buddy. She was the best support to Tokyo that I could have: she was always racing against me, biking with me…


Magdelena Lobnig: Right, and also rowing with me in the double. I always did the double alongside the single: the change of speed at the catch and the finish It helps me a lot in the single to row the double besides.


We always saw in the training that the double is not that bad.


Then this year [Katharina] did a really fast singles trial. She was second in Austria, over the long distance and then we said, “Okay, she might try a team boat this year.” She did the Europeans with another girl.


[Ed. Note: Katharina rowed the W2x with Tabea Minichmayr at Europeans, placing 5th in the B Final. Minichmayr is rowing the W1x here at the Racice Worlds.]


Then I was injured last year; I had a hard winter time, then I had Corona, and I had asthmatic problems during the World Cup season, so I had to quit all of them. Then I went to Europeans, and I saw that the speed [in the single] was still good, but I was out of the medals. It was really close but I needed the change after Europeans. So there we are.


Two weeks after Europeans, I said I’m going to do the double. The federation wasn’t that happy, but they support that decision now.


Katharina: It’s a big honor for me to row with my sister, who has an Olympic medal, in the double. Even though I’m two years older, she says what’s going on in the boat. I have to be very quiet. [laughs] She’s very strict with me, but that’s okay.


We actually wanted to race the 2021 World Champs last year, after Tokyo. 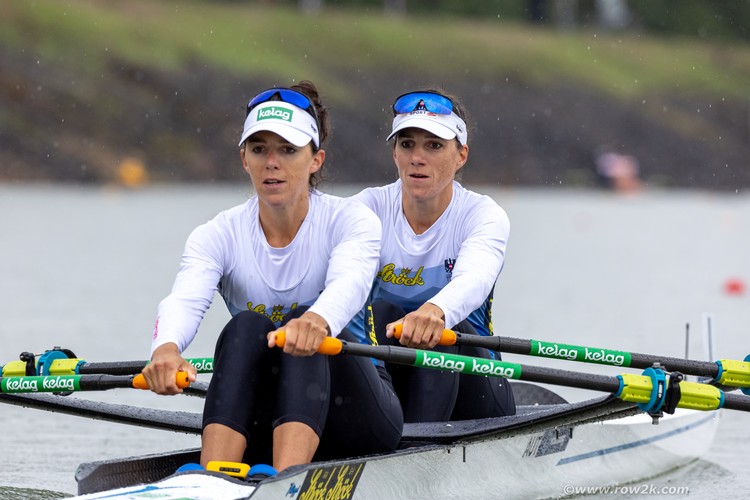 Magdelena: Yes; after Tokyo, I wanted to do something different, so we planned to do [the 2021 Worlds in] Shanghai. Then they canceled Shanghai, so we said, “Okay, we will do Coastal World Champs.” But I got injured before Coastals, a really bad injury, so I couldn’t do that, so [Katharina] went into the single there, and I was just following her there, on crutches.


Katharina: Yes; she supported me at Coastals, so that was a change.


But now, it’s just a big honor for me to run with her in the double and it’s really fun.


We had some problems before we came here; we had some boat problems and speed problems.


Magdelena: We tried everything the past two weeks to get ourselves going: we didn’t know how fast we were, so we were quite nervous before the heat.


We did some practice racing against the Danish team in Volkermarkt, our home city, and we saw that we had to change something. So I got back in the stroke seat, she got back in the bow seat. We changed boats and length and everything. We are still working here to make it more fluid.


row2k: And Katharina, you have a full-time job as well, correct?


Katharina: Yes: I’m a police officer in real life and I work full time. But my chief, he gave me some special holidays, as we say in Austria, and now it’s possible for me to go on the training camps and to be here. That was really nice, but it’s just about five weeks.


row2k: Your heat went well, and you qualified for the semi. Did that make you feel more at ease about your speed in the double this week?


Magdelena: Our main goal was to reach the semifinal because the double scull is really tough at the moment. So after the heat, we said, “Oh, we have our goal!” We are in the semifinals, we wanted to row sub-seven, and we got both. And now we just want to have fun.


Magdelena: Yes that was our main goal; to do something different from the single and have fun again. 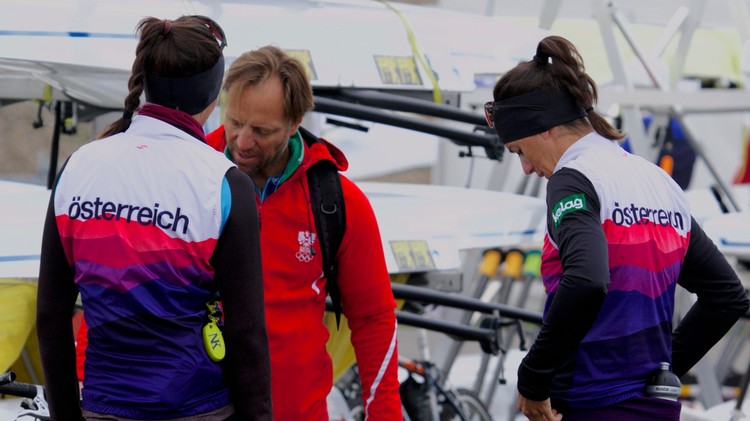 With their coach Kurt Traer


row2k: How did you approach rowing the heat, that first race back together?


Magdelena: In the heat, the plan was quite conservative. We just wanted to get off the start and find our rhythm. We didn’t want to concentrate on the others, because I did look out [after the start] and saw we were one boat before last place. But then we just continued and came through in the sprint.


row2k: Similar strategies to racing the single, or totally different?


Katharina: I always have to say to her, “Wait for me!” I’m not as fast as she because I do not have the 10 years of training that she has. I’m really not strong like her, so she always has to wait for me in the drive and and at the catch…


Magdelena: The most important thing for me is that I don’t forget that somebody’s sitting behind me!


And we raced like that when we were at home, and it wasn’t working. That’s why we are really rowing a low rating now, but it’s working better for us.


We started off rowing the double at the Croatia Open Regatta this year, which is something we often do, but then we continued together, trying the pair and the four, so I tried almost every boat class this year, except the quad and the eight.


So we had a lot of fun and we tried around [in different boats] because I was injured for a long time, and I couldn’t train the whole winter. I still wanted to race in the single and, like I said, I saw that the speed was good, but sometimes you need a change. It’s helping me a lot for the single now.


If you want to keep the motivation high, you need to change from time to time. The monotony is the most dangerous thing.


This page was created programmatically, to read the article in its original location you can go to the link bellow:
https://www.row2k.com/worlds/features/2022/9273/lobnig-sisters-in-w2x—girls-just-wanna-have-fun-/
and if you want to remove this article from our site please contact us

Prince William and Kate travel to Anglesey in Wales, where they had their 1st family home