This page was created programmatically, to read the article in its original location you can go to the link bellow:
https://newsroom.unsw.edu.au/news/science-tech/wood-eating-termites-really-it-when-its-hot-study
and if you want to remove this article from our site please contact us


Termites have quite the wood craving, but it turns out they really like to eat when it’s hot. New research, published today in Science, suggests these energetic wood eaters will play a more significant role in both wood decay and the global carbon cycle as temperatures heat up.

An international study by the University of Miami with co-authors from UNSW Sydney found that termites’ appetite for wood strongly increases with temperature. While it’s well known that warm temperatures are conducive to the activity of these wood decomposers, researchers were surprised by just how much it could affect wood decay rates.

“Wood-eating termite activity increases with temperature more than we thought previously,” says Associate Professor Will Cornwell, a co-author of the study from the School of Biological, Earth and Environmental Science, UNSW Science. “With the climate warming very fast, the major implication is this activity will likely increase in certain parts of the world.”

Termites’ preference for the heat

Many people think of termites and their infestation of timber walls and roofs in homes, but these termites are only a small subset of the species. As one of the only species that can get nutrition from wood, some termites help ecosystems recycle plant material.

“There’s about as much biomass of termites on earth as there are humans. Most of that is in the tropics, where they can eat up to half of the deadwood in forests. So, they’re much more important than you might initially think,” A/Prof. Cornwell says.

Wood decomposition from microbial decay is key to forest ecosystem function, recycling the nutrients in wood and creating and promoting biodiversity. Termites in natural forests and savannas are also important wood decomposers, but they are rarely researched as they don’t exist in many seasonally cold parts of the world. In the tropics they are ubiquitous.

For the study, more than 100 researchers worldwide monitored the decay rate of Pinus radiata wood blocks at 133 sites across six continents. They compared how fast termites and microbes like fungi decompose deadwood in different environments. 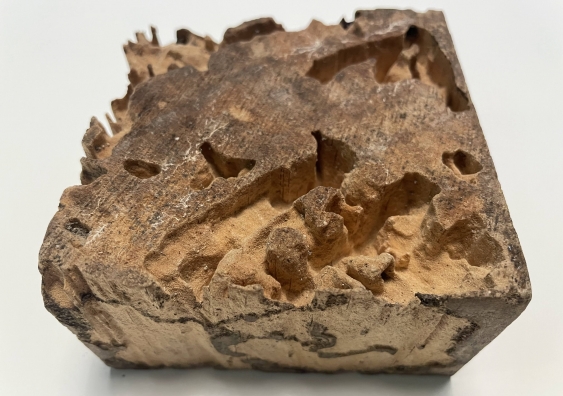 Using activity on the pine blocks as an index of termite activity, the researchers were able to measure native termite activity consistently across the globe. They found the presence of termites and their consumption rate were highly sensitive to temperature – even more so than for microbes. Termite-driven wood rate decay increased by 6.8 times for every 10°C.

“Microbes are globally important when it comes to deadwood decay, but we have largely overlooked the role of termites in this process. This means we aren’t accounting for the massive effect these insects could pose for future carbon cycling and interactions with climate change,” says the lead author of the study Professor Amy Zanne from the University of Miami.

Chewing through the carbon cycle

According to the study, termites had their most significant impacts in places like tropical forests and subtropical deserts – systems often overlooked in carbon cycling models. With increased tropicalisation – shifts to more tropical climates worldwide – the researchers anticipate the zone of high termite activity will likely expand away from the equator as the earth becomes warmer.

“The findings suggest we’re likely overestimating carbon storage in the tropics in our current forecasts and modelling. Because termite activity will likely increase with global heating, it means carbon in dead material will return to the atmosphere faster than we currently think,” A/Prof. Cornwell says.

A/Prof. Cornwell says in addition to increased termite activity in existing habitats, termites may also spread to new areas as the tropics expand with warming temperatures.

“The tropical region is only going to expand as the climate gets warmer, so more attention on the critical role termites play is vital,” A/Prof. Cornwell says. “While we don’t know whether that will impact more buildings and populated areas, we do know that termites like it hot, and it’s going to get hotter everywhere.”

“Understanding how termite decay responds to a warming world will be critical for our capacity to predict the global carbon balance in terrestrial ecosystems in the future,” says Professor Amy Austin, a co-author of the study from the University of Buenos Aires.

“There should also be more attention on termite activity, particularly in places like the northern parts of Australia, to monitor their behaviour more closely as the climate continues to warm,” A/Prof. Cornwell says.


This page was created programmatically, to read the article in its original location you can go to the link bellow:
https://newsroom.unsw.edu.au/news/science-tech/wood-eating-termites-really-it-when-its-hot-study
and if you want to remove this article from our site please contact us