This page was created programmatically, to read the article in its original location you can go to the link bellow:
https://www.archdaily.com/989401/willis-tower-repositioning-gensler
and if you want to remove this article from our site please contact us 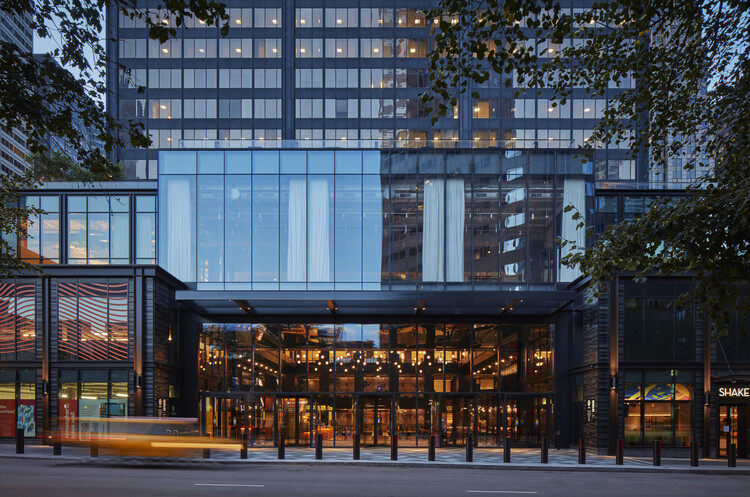 Text description provided by the architects. Willis Tower has been an American architectural icon and centerpiece of the Chicago skyline since 1973. In 2015, a massive mixed-use redevelopment of the site began, seeking to re-envision the tower “from street to sky.” In 2021, this transformation of the 110-story property was finalized, marking the completion of the biggest restoration project in the building’s history. Willis Tower may have been built in an era of single-use buildings and urban flight, but its next iteration consists of a modern mixture of uses with active streetscapes — welcoming to all.

Instituting a human-centric approach, Gensler considered how the building would impact and add value to the daily routines of both the tenants and the community. The new base, which was once a “fortress” of red granite transformed into a welcoming and transparent podium, including a varied and extensive retail and dining experience, as well as rare urban greenspace in Chicago’s Loop. There was no shortage of challenges presented throughout the process from stack effect mitigation and underground structural constraints to homeland security designations and preserving the iconic character of the tower. However, one of the biggest challenges faced was that the entire build had to be done while keeping the tower open and operational for the 15,000 tenants all while navigating an unforeseeable global pandemic in the midst of the project.

While honoring the Tower’s original glass and metal aesthetic, as well as its groundbreaking “bundled tube” structural module, the podium offers a more textural and tactile design at a human scale. Terracotta, a nod to the rich history of its usage in the Loop, was incorporated at the streetscape level to add visual interest and at the main entries to provide visual contrast. A hospitality-inspired open lobby blurs the lines between work and leisure, offering lounge space for mingling and co-working upon entry along with awe-inspiring displays of public art.

Built under the principles of “Style, Structure, and Soul,” Willis Tower’s interior experience celebrates the existing structure while also introducing materials and details reminiscent of notable Chicago neighborhoods. Wherever the superstructure touches the ground, dark aluminum cladding visually recalls the tower above. At the entry on Wacker Drive, the user ascends via a grand staircase between columns, an intentional design element evoking the entry to a historic archeological site. Catalog—300,000 square feet of indoor and outdoor public space including new dining, entertainment, and retail—is a nod to the classic Sears Roebuck & Co. Catalog, the tower’s original tenant, and is attuned to the everchanging nature of commercial spaces. There, offerings include full-service dining with both Chicago’s emerging and widely recognized culinary talent, experiential art exhibits, and high-end convenience shopping. Looking upwards, guests encounter incredible views of the tower through an undulating 75’x85’ skylight.

Atop Catalog is a new, publicly accessible outdoor roof park, spanning 30,000 square feet, which is equipped with a variety of seating options and verdant landscaping inspired by the Illinois plains. The restoration also introduces 150,000 square feet of tenant-exclusive offerings, including event spaces, lounges, cafes, and a fitness center on additional floors of the podium.

Along with the transformation, Willis Tower launched a dynamic arts initiative called Art of the Neighborhood for the art programming throughout the building. Two large-scale permanent installations, akin to other works of public art found throughout the Loop, were installed: one by School of the Art Institute of Chicago graduate Jacob Hashimoto, which hangs in the Wacker Lobby, and one by world renowned artist Olafur Eliasson, which is situated on the building’s Jackson Boulevard facade. With this program, Willis Tower continues Chicago’s tradition of making world-class art accessible to the city at large. Willis Tower also sets a standard for supertall sustainability, achieving LEED Platinum status by increasing efficiency and reducing waste.

This page was created programmatically, to read the article in its original location you can go to the link bellow:
https://www.archdaily.com/989401/willis-tower-repositioning-gensler
and if you want to remove this article from our site please contact us