This page was created programmatically, to read the article in its original location you can go to the link bellow:
https://english.news.cn/20221009/25f07360c1d74281ab9977d719efb2b4/c.html
and if you want to remove this article from our site please contact us

* The solar observatory, named after Kuafu, a giant in Chinese mythology who indefatigably chased the sun, will extend its working hours to over 96 percent of the year.

* Kuafu-1, with three payloads onboard — the Lyman-alpha Solar Telescope (LST), the Hard X-ray Imager (HXI), and the Full-disk Vector MagnetoGraph (FMG) — is an all-rounder satellite specially designed for solar detection.

* Kuafu-1’s scientific objectives are described as the probe on “1M2B” — M for the solar magnetic field and two Bs for two violent bursts, i.e. solar flares and coronal mass ejections (CMEs), and their potential interplay.

JIUQUAN, Oct. 9 (Xinhua) — China sent a solar exploration satellite into space from the Jiuquan Satellite Launch Center in northwest China on Sunday, furthering the country’s scientific endeavor to unravel the mysteries of the Sun. 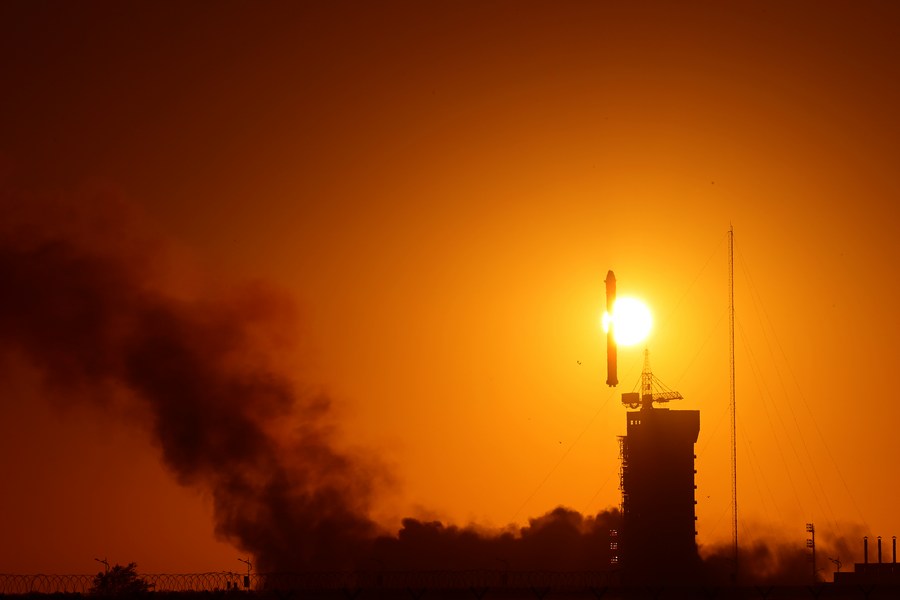 After four to six months of testing, the 859-kg satellite will start normal operation 720 kilometers away from the Earth to study the causality between the solar magnetic field and two major eruptive phenomena, namely solar flares and coronal mass ejections, thus providing data support for space weather forecasting.

The solar observatory, named after Kuafu, a giant in Chinese mythology who indefatigably chased the sun, will extend its working hours to over 96 percent of the year.

A space-borne observatory running at a sun-synchronous orbit is not hampered by the Earth’s rotations, while an Earth-based telescope can see the Sun only in the daytime.

“ASO-S is capable of probing the Sun 24 hours daily for most of the year,” said Gan Weiqun, the satellite’s principal scientist from the Purple Mountain Observatory (PMO) under the Chinese Academy of Sciences (CAS). “Its longest daily time-out is no more than 18 minutes when briefly running through the shadow of Earth each day from May to August.”

The solar probe, with a projected life of no less than four years, is designed to accumulate and transmit back some 500 gigabytes of data within a day, which is equivalent to tens of thousands of high-quality images.

“The onboard detectors take pictures every few seconds or minutes, and during solar eruptions, they can rapidly increase their shutter speed to only one second so as to capture solar activities with more details,” said Huang Yu, associate chief designer of ASO-S science application system.

During its in-orbit operation, three ground stations in the cities of Sanya, Kashgar, and Beijing, far apart from each other, will receive data from space, before sending them in packages over the next four years to a 2,048-core powerful computer mounted at the PMO for decoding.

Kuafu-1, with three payloads onboard — the Lyman-alpha Solar Telescope (LST), the Hard X-ray Imager (HXI), and the Full-disk Vector MagnetoGraph (FMG) — is an all-rounder satellite specially designed for solar detection.

Operating also in a sun-synchronous orbit at an average altitude of 517 km, Xihe carried a solar H-alpha imaging spectrometer as its main scientific payload, obtaining for the first time globally, the fine structure of solar H-alpha, SiI, and FeI spectral lines in orbit.

Kuafu-1 is set to add another piece of our host star’s spectral jigsaw. The LST installed on it can seamlessly collect the Lyman-alpha light near the corona emitted from the full disk of the sun.

The wave band of Lyman-alpha, representing the neutral hydrogen spectra released by more than 70 percent of the solar mass, is known to be the strongest ultraviolet emission line that affects the Earth’s ionosphere.

The full-disk Lyman-alpha observations will open a fresh window that may reveal new solar physics, said Feng Li, the LST data scientist from PMO. “They’re the first of its kind in the world that images from the disc center to a 2.5 solar radius.”

HXI, installed on the Kuafu-1, will probe the non-thermal high-energy electrons accelerated in solar flares in the energy ranging from between 30 and 200 keV, with more than 90 tungsten optical gratings at each side.

“A single grating, with a diameter in centimeters, is divided into thousands of slits, the slightest of them only 18 microns,” said Su Yang, HXI’s data scientist from PMO. “The array constitutes a compound eye for X-rays and see the big picture and details at once.”

Now, the farthest reaches of the universe have been put within the radius of human observations, but the sun remains “the only star accessible for our close investigation,” according to Gan.

Kuafu-1’s scientific objectives are described as the probe on “1M2B” — M for the solar magnetic field and two Bs for two violent bursts, i.e. solar flares and coronal mass ejections (CMEs), and their potential interplay.

“Our understanding of the sun is far from profound, and how could solar flares and CMEs take place and affect our planet is still not that clear,” said Gan. “The sun is the most familiar but the strangest star to humankind.”

Solar flares are the intense localized eruptions of electromagnetic radiation in the sun’s atmosphere, while CMEs are large expulsions of plasma and magnetic fields from the sun’s corona.

LST will increase the probe accuracy on CMEs by about three orders of magnitude, compared with a probe in visible light, while HXI is able to obtain rich characteristic information on solar flares simultaneously, including location, shape, radiation intensity, and time evolution.

FMG can measure the complicated solar magnetic field, a crucial factor that may influence solar flares and CMEs. Its precision reaches 5 gauss, merely a thousandth of the sunspot magnetic field intensity, said Zhang Haiying, an FMG designer from Nanjing Institute of Astronomical Optics & Technology under CAS.

“The detector can image the full disk magnetically in such a similar accuracy every 18 minutes during solar eruptions, making up a movie that can help us unravel the secrets of how the sun is discharging its tremendous energy,” said Zhang.

Gan said the 1M2B allows scientists to “know more about how the solar activities took shape and evolve,” and it also “lays the physical basis for forecasting the space weather.”

The 11-year solar cycle, starting in the latter half of 2020 and coming to a close in about 2031, is expected to see its peak in 2024 to 2025, with frequent solar eruptions that may cripple the global communication and positioning as happened at its last peak on Halloween of 2003.

“Kuafu-1 was launched at a timing that the ascending curve of solar activity, from dormancy to its most dynamic stage, can be continuously catalogued,” said Gan.

“Specifically, the LST can serve as a space weather forecaster to raise alerts of CMEs 40 hours in advance to secure an earlier prevention on Earth.”  Enditem


This page was created programmatically, to read the article in its original location you can go to the link bellow:
https://english.news.cn/20221009/25f07360c1d74281ab9977d719efb2b4/c.html
and if you want to remove this article from our site please contact us