This page was created programmatically, to read the article in its original location you can go to the link bellow:
https://earthobservatory.nasa.gov/images/150456/light-show-near-the-limb
and if you want to remove this article from our site please contact us 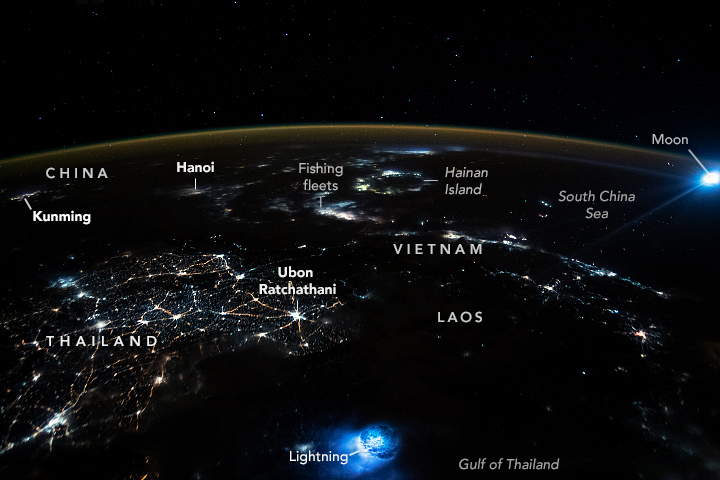 An astronaut onboard the International Space Station (ISS) took this photograph while orbiting over Southeast Asia and looking toward Earth’s limb. The Vietnamese coast and Thailand anchor the center of the image. For context, the distance from Hainan to Kunming, a city in southern China, is more than 800 kilometers (500 miles).

In the background of the photo, the circular shape of Hainan Island—China’s southernmost province—is outlined by the lights of its coastal cities. Millions of years ago, Hainan was connected to the mainland. Then a rift formed in the Hainan Straight and separated the two landmasses. Today, Hainan sits about 20 kilometers (12 miles) from mainland China.

In several parts of the image, storm clouds blur the white- and orange-hued city lights. Thailand’s landscape is illuminated by the lights of Ubon Ratchathani, Amnat Charoen, and Yasothon, and the network of highways that connects the cities. Inland from Vietnam’s coast, a strip of darkness includes less-populated areas of southern Laos.

The astronaut photographer also captured a bright lightning strike over the Gulf of Thailand, while the Moon appears just above Earth’s limb on the upper right edge. Fishing fleets seen near Vietnam’s coast illuminate the South China Sea.

Astronaut photograph ISS066-E-24707 was acquired on October 30, 2021, with a Nikon D5 digital camera using a focal length of 28 millimeters. It is provided by the ISS Crew Earth Observations Facility and the Earth Science and Remote Sensing Unit, Johnson Space Center. The image was taken by a member of the Expedition 66 crew. The image has been cropped and enhanced to improve contrast, and lens artifacts have been removed. The International Space Station Program supports the laboratory as part of the ISS National Lab to help astronauts take pictures of Earth that will be of the greatest value to scientists and the public, and to make those images freely available on the Internet. Additional images taken by astronauts and cosmonauts can be viewed at the NASA/JSC Gateway to Astronaut Photography of Earth. Caption by Minna Adel Rubio, Jacobs Technology, JETS Contract at NASA-JSC.


This page was created programmatically, to read the article in its original location you can go to the link bellow:
https://earthobservatory.nasa.gov/images/150456/light-show-near-the-limb
and if you want to remove this article from our site please contact us